For more details please visit the ITS System Status.

Home » About ITS
» MSU Computing Center Is Named In Honor of Dr. Thomas Tramel

The Mississippi State University computing center has been named in honor of the late Dr. Thomas E. Tramel, an internationally acclaimed scholar and authority in agricultural economics.

The computing center is located in the new Allen Hall, a $3 million structure that houses executive offices for University officials and teaching facilities for more than 1,600 students.

Dr. William L. Giles, president of MSU, officially notified Mrs. Tramel this weekend of the decision of the University to name the installation in honor of Dr. Tramel and personally conducted her on a tour of the department.

Dr. Tramel was a member of the original committee appointed by the late president Dr. Ben Hilbun to select a computer for the University in 1957.

A major user of the computers as long as he lived, Dr. Tramel developed programs and techniques in computer science that are still used by institutions of higher learning throughout the world.

At the time of this death he was a full professor in both Computer Science and Agricultural Economics, and was the first director of Institutional Research at MSU.

Dr. Tramel was the first person ever selected by students, alumni and faculty to receive the annual award presented by MSU's Alumni Association for outstanding accomplishments in research.

Though only 46 years old when he died in 1967, Dr. Tramel was the author or co-author of more than 65 papers widely published throughout the world. He was recognized as one of the leading agricultural economists in the nation and received national and international recognition for his work in mathematical economics, statistics and programming.

He participated in the development of reactive programming which represented a major breakthrough in solution procedures used in spatial equilibrium analysis.

Dr. Tramel earned a B.S. and M.S. Degree at MSU and received his Ph.D. at Iowa State University.

The Tramel Computing Center is said to be the largest and most modern in the state and one of the most outstanding in the entire region.

The huge complex of computers processes more than 30,000 problem solutions each month in the areas of education, research, service to industry and agriculture and to government.

Consequently the center is one of the most modern teaching facilities in the nation for a large number of students at MSU majoring in Computer Science.

Reprinted with permission of The Starkville Daily News. 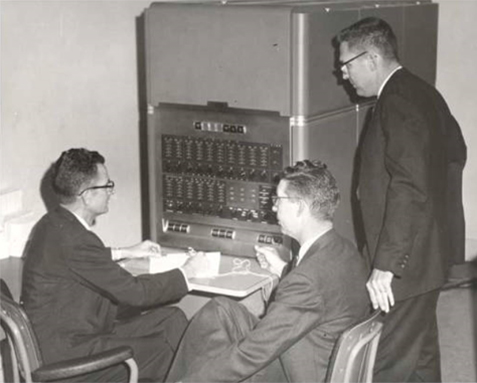